Where My Sandals Take Me: Tenerife, Canary Islands

Posted on September 18, 2016 by jameswhoddinott

South side of Tenerife

Tenerife has something for everyone. Tenerife’s holiday hot spots are often divided into the north and south part of the island. With the very dry, sandy beaches and the towns of Los Cristianos. Playa de la Americanos and Costa Adeje in the south. Puerto de la Cruz and Santa Cruz to the north. If you landed in the south airport and visited the beautiful port towns it wouldn’t be hard to spend your entire holiday enjoying the golf, beaches, restaurants, shopping and night life of this part of Tenerife. Doing so however would mean that many of the Tenerife’s treasures would remain undiscovered.

The dominating landscape feature of Tenerife is Mt. Teide. It is certainly worth a day trip to Mt. Teide which can easily be done on your own or a tour bus. It is a busy place but takes you into a different place from the sandy beaches of the south shore. If you come from the south be sure to drive all the way to Puerto de la Cruz so you see the lush green forest found on the north side of Mt. Teide.

Teide National Park includes an enormous volcanic crater 30 miles (48 km) in circumference, surrounded by beautiful rock formations with the majestic Mount Teide keeping eye on the location for the shooting of the original Planet of the Apes. We took the one day tour to Mt. Teide that included a little bit of everything. Our tour began in the beautiful town of Puerto de la Cruz. The tour was going to offer us a glimpse of not only Mount Teide but also Masca, Los Gigantes and Icod de los Vino to get a taste of some of the Canarian Wines and a glimpse of the Dragon Tree. The tour gave us a great glimpse of the wide range of landscapes found on the island of Tenerife.

I can lay claim to having driven the famous ‘Road to Hanna’ on the island of Maui, Hawaii on two occasions and have the T-Shirt to prove it but I took the advice of the Tenerife locals who said a tour bus was the best way to see Masca. The road to Masca is narrow and is one lane that has traffic travelling both ways. It is a popular tour location so there are many of the smaller tour buses that are found on the roads making driving much more difficult. On numerous occasions as we made one of the hairpin turns we encountered a car coming towards us and had to stop as the car went in reverse to find a spot wide enough to let us pass. The scenery is breathtaking which makes the drive worthwhile. There is a hiking trail that looks like a must for the young and adventurous. 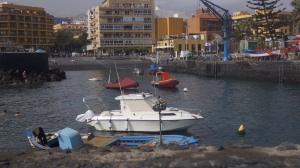 We spent the majority of our time on the north side of the island which is lush, full of vegetation, banana plantations and of course those mystical black sand beaches. Puerto de la Cruz is a gem. An old port city that is more typical of a Spanish town with a Canarian flare. To spend a day walking in Puerto de la Cruz means a really good work out through cobblestone pathways, ocean side promenades, parks and plaza, restaurants and shops. Walking along the ocean you will see beachgoers everywhere putting their towels on any spot available to enjoy the warm afternoon sun.

What sets Puerto de la Cruz a part from the southern destinations is the abundance of old villas, the protective fortress the marks the landscape protecting the centre of town from an invasion from the sea.

Tenerife can not be enjoyed in just a short visit but deserves your time. Our two weeks on the island was a mere glimpse into what the Canary Islands has to offer.

Tenerife also deserves more than one post. My next posts will describe in more detail the beaches, the patios and culture of Tenerife which is what makes it truly one of the great holiday destinations.

My novel 'When Eagles Dare to Fly' represents my belief that good will always triumph over evil and by developing who we are on the inside we will find our way. My newest novel 'The Fates' was released earlier this year that examines a society that discovers immortality. I have a blog called an 'Author, blogger and his musings' which talks about my writing, political issues as well as other areas of interest like education, art and photography,
View all posts by jameswhoddinott →
This entry was posted in My Writings, Travel?Photography and tagged beaches, Canary islands, Dragon Tree, holiday, Los Cristianos, Masca, Mount Teide, photography, Playa Adeje, Puerto de la Cruz, Punta Bravo, Teide National Park, Tenerife, travel. Bookmark the permalink.