The Adventures of WestJet Flight 1833

Posted on August 19, 2013 by jameswhoddinott

Travelling is always an adventure. Whether we travel by car, air or are one of those brave souls that take the ultimate adventures by bike, hiking or boat the unexpected can happen. We often don’t plan for a flat tire, a car getting stolen or some mishap that can put a damper on a vacation. My dad always said to me anyone can be a good person when things are going well but the true measure of an individual is how they react in times of difficulty or stress. I happen to also believe the measure of a good company is how they react when things don’t quite go according to plan.

Flying home from the Big Island after a great vacation aboard  WestJet Flight 1833 is when the unexpected happened. When you leave at 11:55 pm your intentions throughout the day are to try to enjoy your last day on paradise and sleep until you safely arrive in Vancouver to make that last leg of your journey home. About 90 minutes into our anticipated six-hour flight the announcement came, ‘This is your captain speaking,’ for a brief instant your mind is filled with a range of thoughts like; ‘On today’s flight you will be receiving complimentary food and drinks’ or on the negative side  ‘I should have listened to the safety talk or boy I wish I could swim’. However as is usually the case our minds over exaggerate the news we are going to hear and of course It was none of these things it was simply, ‘The plane has an electrical problem so we will be turning around and flying to Honolulu.’ It might have worried some passengers but when the pilot also added we will need to fly around for about an hour or so to burn off some fuel, you kind of got the sense this wasn’t an I need to call my kids and tell them ‘I love them’ kind of situation. It was just going to be one of those long days sitting around the airport in Honolulu waiting for them to fix the plane and find the approximately 200 passengers an alternate route home. 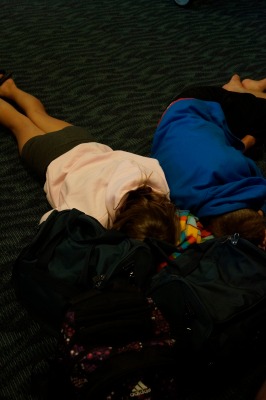 Our plane landed in Honolulu at about 3 am. The two hundred passengers quietly got off the plane and waited to hear the next steps. We were immediately given ten-dollar food vouchers to grab something to eat while we waited for WestJet to find hotels for the same two hundred passengers to stay in. Well it is looking up. An extra day in Hawaii, perhaps a nice hotel on the beach and fly home the next day. Not so bad. I can live with that. So now to use that ten-dollar voucher. The only place open at the Honolulu Airport at three in the morning is Starbucks. You can imagine 200 passengers heading off to Starbucks ten-dollar voucher in hand. The line-up was long as two young women did a fantastic job making Lattes and smoothies or whatever the customer ordered. They did so with a smile and also the traditional Hawaiian ‘Mahalo’ meaning thank-you. It was at this time I also knew the character of the passengers I was stranded with. There was no pushing or shoving or cutting in line and I didn’t hear anyone complaining. We all waited in line patiently and smiled as we got our order from these two hardworking and polite young women.

It was six in the morning before we discovered there were no empty rooms in Honolulu. Imagine a long weekend in Honolulu on a Saturday NIght and the rooms are full. We were however informed that WestJet had made arrangements with the Marriott Waikiki Resort to house the passengers in a ballroom and provide cots for the passengers. We also were informed shuttles would be arriving and we would have full access to the resort facilities. The shuttles took us in groups to the Marriott where we were greeted by the Marriott staff and the ballroom already had some cots set-up and they would be bringing more. Pillows and blankets and sheets were also provided. It is important to remember this is a large hotel that was already booked to capacity. When they ran out of cots they simply went to the store and purchased some additional air beds (still in their boxes) for some passengers while others like me decided to go pool-side and fall asleep in the warmth of the Hawaii sun.

As we entered the Ballroom a Marriott representative handed every passenger a voucher to enjoy their breakfast buffet and informed us they had extended the buffet hours to accommodate us.  We were also informed the flight would be leaving at about 5 pm so to enjoy our day and an additional voucher would be provided for lunch at eleven.

After a restful time poolside on return to the room we were informed by a Marriott representative the plane would now be departing at 6:30 and shuttles would be arriving at the hotel at shortly after four to return us to the airport. Should I sleep or should we go exploring Waikiki Beach. Again I thought of the wisdom of my father who always said ‘Things are what we make of them’. Well here was a gift to explore Waikiki and so in reality the choice was obvious. For those of you who have never been to Waikiki you may have felt a little bit like me. Wow this is beautiful and Wow this is busy. People and shops everywhere. People surfing, swimming and relaxing. We of course, in this short of time, didn’t get the true Honolulu experience as there was no tour of Pearl Harbour or visit to Diamond Head but we kind of got the cruise ship version of Honolulu.

There was a long flight ahead of us so time to visit the poolside restaurant at the Marriott to make use of the twenty-five dollar a person lunch voucher provided to us from WestJet. So for those of you with an accounting background it would be interesting to note that so far we had been provided a ten-dollar voucher for food upon landing, another ten-dollar voucher at about six in the morning, a voucher for a decadent breakfast buffet ($22.95 per person) and twenty-five dollars now for each person for lunch. The poolside restaurant at the Marriott offers magnificent views of the ocean, the surfers and Waikiki Beach. Fish Tacos and seared Ahi as an appetizer was my lunch time choice as well since I was kind of feeling a little like a taste of home so a Canada Dry Ginger Ale was my drink of choice. Once again the restaurant was busy but service was excellent and the staff welcomed us warmly making sure all our needs were met.

It was now getting close to departure time from the hotel and for those of you that travel and spend time on a plane realize every once in a while you just need a good shower. It had been posted on the board that there was a hospitality room for our use so off to the Front Desk to get the key to the hospitality room and have that refreshing shower before leaving the hotel. Shuttles were there and promptly took us to the airport where we were greeted by six staff checking us all in and providing us with all the information and tickets for our flights home. We were told that since we were arriving in Vancouver at 3:30 in the morning we all would be provided a room to wait for our next flight.

The flight to Vancouver although it left Honolulu a little late was smooth and again food was offered to us. As for me, I passed on the plane food and took this time to try to sleep. When we landed and made our way through customs we were greeted by a WestJet representative who provided us with our hotel voucher and another 25 dollar food voucher. If you have never been to Vancouver you are missing something. Even the airport is something to behold and attached to the airport is a Fairmont Hotel. Walked up to the front desk and we were welcomed with open arms and were checked in and assigned a room within minutes. The room was beautiful and on the eleventh floor complete with a telescope to view the mountains in the distance.

The flight left in 5 hours so there was only time for a quick nap, a shower and breakfast. Another decision to make. Should we have breakfast at the airport or in the comfort of the Fairmont. Not a touch choice and once again was treated to great service and wonderful food. Can’t say enough about the Eggs Benedict with salmon instead of bacon. Then it was off to catch the last flight home.

When people first hear that we had flight problems they like my first thoughts, imagine hours of waiting in the airport and how awful that must have been. Well I guess it could have gone that way but kudos to the people who worked hard on making a difficult situation better. The flight crew of  WestJet 1833, all the staff at both the airport in Honolulu and Vancouver, the Marriott Waikiki Resort Hotel and their staff who exemplified service and care of people who found themselves on their doorstep. They made us feel welcome. To the people at the Fairmont in Vancouver who did the same. Oh and I mustn’t forget the two young ladies at Starbucks who were bombarded by 200 tired passengers at three in the morning and met us all with a smile and a ‘Mahalo’.

Coming back home to work and getting back in the routine of Winnipeg after a holiday in one of the prettiest and friendliest places I have been is tough. The only solution of course being to do what is great about Winnipeg. A pizza on the patio of Corrientos in the exchange on a beautiful August day and of course looking forward to the street-party on Bannatyne this weekend.

As I write this post in pops an email from WestJet apologizing for the inconvenience caused on our flight and providing each passenger with a three -hundred dollar voucher for our next flight.

Imagine all this service was provided without customers getting angry and as some people would say ‘ripping them a new one’ but rather everyone working together respectfully to make the best of a situation that sometimes happens when you travel. My final congratulations go out to my fellow passengers whose experience may vary from mine and some may have had pressing issues at home that made the extra day in Hawaii a big inconvenience I say thank-you. Your courteous and respectful actions also made this an experience to be added to one’s travel memories rather than something to be found on a You Tube video.

My novel 'When Eagles Dare to Fly' represents my belief that good will always triumph over evil and by developing who we are on the inside we will find our way. My newest novel 'The Fates' was released earlier this year that examines a society that discovers immortality. I have a blog called an 'Author, blogger and his musings' which talks about my writing, political issues as well as other areas of interest like education, art and photography,
View all posts by jameswhoddinott →
This entry was posted in My Writings and tagged Calgary, Fairmont, Hawaii, Hoddinott, Holidays, Honolulu, Marriott, Pearl Harbor, Starbucks, United States, Vancouver, Waikiki, WestJet, Winnipeg. Bookmark the permalink.

2 Responses to The Adventures of WestJet Flight 1833