Posted on December 6, 2013 by jameswhoddinott

If after reading this post you would also like to appeal the VARIANCE APPLICATION: DAV 13-170176/B to allow the City of Winnipeg to change the Variance please contact:

City Planning and Development under the direction of our current Mayor Sam Katz and counselors has just gone through an audit by Ernst & Young which provided a sobering reflection on how the City of Winnipeg does business. Cost over-runs, not appropriate checks and balances in the system, no long-term vision for development and business dealings and hiring of close personal friends of the Mayor. The Mayor and Councilors are elected to as Counselor Gerbasi stated,”cities are supposed to serve its citizens. They think we’re about pipes, police and pavement, but cities are actually about people, and I think that’s what’s been forgotten in this budget,”

I would go one step further in saying there is a moral and civic responsibility to provide a plan and vision for the City of Winnipeg that is transparent and involves the citizens of Winnipeg. We need to put a stop to Katz’s legacy of fiscal mismanagement by a proclaimed businessman so he does not bankrupt Winnipeg. We have had a seventeen million dollar cost over-run in our new Police Station, a 4 million dollar deficit with the Fire Halls, developers going unchecked in expensive and unsustainable ‘Urban Sprawl’ developments. Decisions made without guidelines, without a vision and apparently financially benefitting some of the Mayor’s friends and much speculation it hasn’t hurt the Mayor’s pocket-book either. The secrecy, lack of consultation and what can be said as tenuous at best given the  timing of announcements related to the construction of a 24 Storey skyscraper in the midst of our historic neighbourhood that will have consequences to the well-being of Winnipeg long-term. The proposed 24 storey Sky Scraper on James Street and Waterfront Drive represents many of the pitfalls already identified in the Ernst and Young Audit of the Fire hall.
Let’s be clear the Mayor’s hands are all over this project. The announcement of the project was made in August and now the proposed variance is posted in December with a deadline for appeals being December 16th. City Planners and the proposed developer must be counting on the busyness of the two holiday seasons to catch Residents of the Exchange off guard. I have attended a meeting with Residents in the area and the over-riding theme is pro-development, pro-respecting the integrity of the Exchange District as well as not wanting to add another building in the Exchange that will be a blight on what was becoming a beautiful and historical centerpiece worthy of Winnipeggers. Here is the essence of the by-law our City Planning department is requesting a variance for:

Downtown Zoning By-Law 100/2004 was being crafted at the same time Waterfront Drive was being developed as a roadway. The zoning standards for the Waterfront Drive Downtown Living Sector were created in tandem with an overall vision for the redevelopment of this area. It was a unique opportunity to create a different kind of downtown-street, with a large number of City-owned redevelopment sites available to advance the Waterfront Drive vision of compact, low-rise, mixed use development reflective of the adjacent Warehouse Sector. The same year Zoning By-Law 100/2004 was adopted, the City published the Waterfront Drive Expectations for Development guideline document. It encourages new buildings to be two to six storeys in height built up to the sidewalk. (The zoning permits eight storeys south of Galt Avenue, with no height limit north of Galt.) Six Waterfront Drive parcels have been developed since 2004. Only one is over six storeys. The eight storey Excelsior complex has its top storey set back so that the visual massing is reduced.

There will be people who will come out in favour to the project reaching out to the fears of people who look how long the property has sat vacant. This is our last chance to have development here. If you are against this project you are against development. Let there be no mistake about it I am against the kind of development that our Mayor and Council have been doing, but I am pro-development, pro-Winnipeg and more than anything recognize that continued haphazard development by our Municipal government will eventually bankrupt our city.
In the last 10 years there has been growth downtown where many believed no one would want to live. It is a strong and vibrant community. Imagine if you were the developer of Sky Waterfront, ‘The Excelsior’ or any of the other beautiful and historic developments that respected the intent of the by-law and vision for the area but contributed to building a not only a vibrant community but one that respects and highlights the Historical aspects of the Winnipeg. The previous developers now have to watch as bylaws are changed that changes the rules and some would indicate, give preferential treatment to the developer and designer of the skyscraper. ‘The Mere’ hotel is another example of preferential treatment as it not only was developed on a site that was to be Green Space but is a  design that will be a blight on our skyline for the foreseeable future and this new twenty-four story building  will only serve as another scar that no future plastic surgery will be able to remedy. 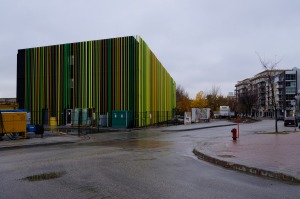 It is disappointing to me that this application has gotten as far as it has. It is another indication of the need for a plan, strategy and criteria for development in the City of Winnipeg. It is difficult to understand why a City of over 700 000 people doesn’t have such a plan, strategy or specific criteria for development.  A variance requesting to change the current 8 storey height regulation to 24 stories is no small request. The resulting change would impact not only the cultural and historic make-up of the community but also has implications for the issues of parking, traffic as well as there should be concerns in regards to the stability of land and possible issues arising on neighboring developments.
Living in the Exchange District has certainly resulted in me being more aware of City politics. At times it has made my stomach turn as the apparent disregard for the people of our communities underlies every decision made. This is not just a residents of the Exchange area problem, but a problem that will have a negative impact on all Winnipeggers now and into the future. This particular variance being requested does not meet any standards that should be required when developing in this Historic Community and should not meet the standards of any city let alone our City. Make no mistake about it this is a valuable piece of Real Estate that overlooks the river and Stephen Juba Park and it shows a lack of faith by our civic leaders that they think this is the best we can do.

Again I would like to indicate I am pro-development but it must be thoughtful. Perhaps the City of Winnipeg would benefit from following the lead of many Canadian and US cities as they develop strategies and criteria for development.

My novel 'When Eagles Dare to Fly' represents my belief that good will always triumph over evil and by developing who we are on the inside we will find our way. My newest novel 'The Fates' was released earlier this year that examines a society that discovers immortality. I have a blog called an 'Author, blogger and his musings' which talks about my writing, political issues as well as other areas of interest like education, art and photography,
View all posts by jameswhoddinott →
This entry was posted in Political Issues and tagged City of Winnipeg, EPC, Ernst & Young, Exchange District, Mayor, Pumphouse, Residents of the Exchange, Sam Katz, Stephen Juba Park, Waterfront Drive, Winnipeg, Winnipeg Free Press. Bookmark the permalink.