Sustaintainable Growth: The Real Issues Facing our Next Mayor (Part 2)

Posted on August 31, 2014 by jameswhoddinott 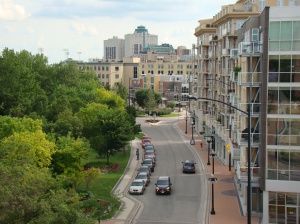 One of the essential components of having an effective government, at any level, is the ability to create both short and long-term plans that fit into a comprehensive vision for municipalities, the province and the country. The difficulty with a government that is politically driven, is it creates a system based on ideologies, the desire to get votes, or rewarding individuals, groups or corporations in return for their support, rather than making decisions based on the basic principles of creating sustainable growth as outlined in well-thought out plans and visions that is service orientated.

Canada’s success as a nation has been based on understanding the need for economic growth as well as addressing the need to develop effective policies for people. When policies become too focused on the economic-side, inevitably the human side suffers and vice-versa. It is why politics needs to be removed from of the equation and decisions need to be based on effective and sustainable plans. The key to successful municipalities, provinces and our country is identifying our vision and then understanding where we are, the gaps and then implement the strategies required in order to move us closer to our vision. It requires both a plan, and a plan of action to be successful.

Examining the City of Winnipeg, it is this lack of a clear vision, plans that are ignored or not in place, as well as the politic interference that has seemingly corrupted and plagued decisions.

Growth is imperative for a city and through a well-thought out vision and action plan the politics of decision-making can be removed from planning. The Smart Growth Network of Canada was created to assist this planning process.

The Smart Growth Canada Network (SGCN) is a national organization founded in May 2003 to help advance the implementation of smart growth and sustainability principles across the country through education, research and capacity building strategies for the broad range of decision makers.

It is essential that in order to eliminate the debacles of the last Mayor and Council we need to implement the essential components of planning. The Smart Growth Network of Canada identifies 10 principles of Smart Growth. These are the foundations essential to guide our municipal government as well as serve as the cornerstone for our civil servants as they implement the City’s vision. If that was the case, the questions asked in council, at public meetings, as well as in the media would be based on “Is this helping us get to where we need to go?”

Currently it appears Winnipeg does not have a plan for growth and it has created an environment driven by politics. Research currently over-whelming supports the need for cities to create walkable communities with a mix of residential and commercial use, making neighborhoods an attractive place to live. Research also makes it clear that ignoring the issues associated with Urban Sprawl and not focusing growth on enhancing already existing communities that utilize the services and infrastructures already in place is not sustainable, costly and is not environmentally friendly.

Urban Sprawl has created the need for people to use cars as they live further and further away from their work place. Our current reliance on cars creates a need to spend large amounts of money repairing the infrastructure required to support a system that is not sustainable in the long-term. Winnipeg needs to create a safe and effective public transportation system. In order to change the current car culture, it will require specific policies in regards to growth and the incentives required for development to occur in existing communities as well as incentives for the public to use public transportation as a move to a more sustainable city as we move forward.

Policies to decrease bus fares to increase ridership and enhancing service on major arteries as well as the Park and Ride locations that can serve as hubs for drop off and pick-up locations are some of the initial steps required to be implemented while the long-term infrastructure of the city is developed to create a sustainable vision for the city’s transportation needs. Some cities have provided free bus fare with exciting results. Less traffic would assist in the creation of safe routes for cyclists as well. In some respects it is expanding the transportation being currently utilized to get football fans to the new stadium but on a much larger scale. This can also be expanded for Jets’ games as well as getting people to and from work. In the long-run, research also indicates not dealing with long commutes and traffic decreases a person’s happiness and increases problems associated with mental health. All with huge costs that can be lessened through a planning process that incorporates people into the equation.

By designing Winnipeg moving forward that supports and encourages the need for public transport and walkable and cyclist friendly communities requires re-building existing communities to mixed-use development as well as capitalizing on existing green space. New developments must include Green Space for parks as well as common meeting places to build a sense of community. A plan for growth must include the services people need in their community for groceries, medical, and other essential services. It is essential communities are developed into self-sufficient pods that are unique with the city centre serving a place for all citizens to come together.

A city designed on these principles would certainly not entertain the removal of green or public land space but rather put a plan in place to enhance and develop the existing infrastructures to support the utilization of public green space.

In order to accomplish this kind of long-term sustainable growth it will require a Mayor who can clearly articulate a long-term vision for Winnipeg. It will require planning at all three levels of government but most importantly a change from decisions being based on politics rather than best practice.

To see 10 Principles for SMART GROWTH click on link below:

To see articles on the cost of Urban Sprawl click on links below:

Part 3: On the series Real Issues Facing a Next Mayor to be published on Wednesday, September 3rd.

My novel 'When Eagles Dare to Fly' represents my belief that good will always triumph over evil and by developing who we are on the inside we will find our way. My newest novel 'The Fates' was released earlier this year that examines a society that discovers immortality. I have a blog called an 'Author, blogger and his musings' which talks about my writing, political issues as well as other areas of interest like education, art and photography,
View all posts by jameswhoddinott →
This entry was posted in My Writings, Political Issues and tagged City Council, city hall, City of Winnipeg, election, government, Hoddinott, Mayor, Municipality, Smart Growth, sustainable growth, Urban sprawl, Waterfront Drive, Winnipeg, Winnipeg Free Press. Bookmark the permalink.

1 Response to Sustaintainable Growth: The Real Issues Facing our Next Mayor (Part 2)