The Politics of Human Rights

Posted on September 18, 2014 by jameswhoddinott 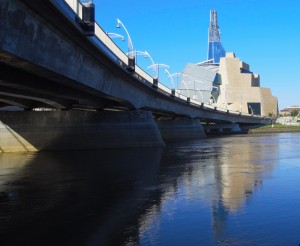 Friday, September 19th marks the grand opening of the Canadian National Human Rights Museum. The Human Rights Museum is located where people, cultures, history and business all come together in a picturesque backdrop allowing us to better understand our journey towards a fair and just society.

It is no wonder there is great excitement in Winnipeg surrounding the opening of the Canadian Human Rights Museum. I for one am looking forward to frequent visits in hope to gain a deeper understanding of past and current struggles in regards to our human rights. However, it isn’t always the event itself that prevents Human Rights atrocities from continuing to occur today and in the future, but it will be our ability to address the symptoms, the causes for the human rights violations. We must treat the symptoms, the causes that take people to the point where they can abuse or neglect the rights of other people. What happens to someone who takes them to a point where they can ignore the plight of others? Where they see other human beings as less deserving or as worthy as they are? How do we fall victim the untruthfulness of the propaganda our politicians use to convince Canadians to blame those people being marginalized for their poverty? If we stopped and looked at the data, the evidence we would discover the blame of increased poverty lies elsewhere.

Whenever societies develop policies that create discrepancies in how people are treated, valued and their ability to access the basic human rights afforded all citizens the steps are being instilled to create a culture of blame.

Over the last number of years in Canada a number of government policies have resulted in the favouring of certain segments of the population and neglecting others. One simple example is our current governments neglect of children, families and working-age Canadians. On November 24th, 2014 it will be the 25th Anniversary of the House of Commons unanimous resolution to eliminate child poverty among Canadian children.

The cost of ignoring this issue will have long-term negative effects on education costs, health care, crime as well as the inclusion of all our people in our society. The marginalization of an increasing number of Canadians both politically and economically will continue to put a financial burden on our country today and in the future.

According to the Conference Board of Canada in regards to child poverty Canada ranks 15th out of 17 peer countries with Japan and the United States being the only countries that scored lower. There are actually more children living in poverty today than there was in 1989 when the declaration to end child poverty was agreed upon by all political parties.  The child poverty rate has far-reaching implications for the long-term health of a society. With an estimated 1 and 7 Canadians children living in poverty and in provinces like Manitoba and Saskatchewan where almost 50% of Aboriginal children live in poverty the human and financial costs are staggering. 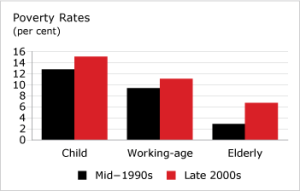 The Conference Board of Canada recommends taking examples from other countries who are tackling the issues by a combination of social supports, education and job creation. The immediate action of changes to the tax system that supports children, single parents and families is an important first step but it must be done in a way that encourages self-sufficiency rather than dependence. A focus on ensuring every Canadian has a place to live, food to eat, education and the safety of a healthy community in which to live.

The Conference Board’s overarching goal is to measure quality of life in Canada and its peer countries. High rates of poverty among working-age populations indicate wasted human resources, opportunities, and public spending. As the OECD has concluded, “failure to tackle the poverty and exclusion facing millions of families and their children is not only socially reprehensible, but it will also weigh heavily on countries’ capacity to sustain economic growth in years to come.

Our current government’s focus on putting more money into the hands of business has not resulted in the job creation promised. according to the Conference Board of Canada 1 out of every 10 Working-Age Canadians live in poverty which is jeopardizing their well-being and the well-being of their family and children. Twenty-one per cent of children in poverty live in families where both parents work. The focus on reducing the business share of taxes has resulted in a small segment of the population getting a larger share of the pie with less obligation to be contributing to the larger society. This policy has neglected the rights of children, young people and families. The long-term cost of a poor, uneducated society that devalues individuals through socially irresponsible policies will be staggering.

Poverty is marked by increased crime, health needs, and a lack of skills and training to take part in the jobs of the future. It creates dependence rather than a culture of shared responsibility and sustainability. It creates a culture that changes our view of people. When we start to look at people as less than who we are, it becomes easier to allow the neglect and marginalization of those disadvantaged economically will lead to more Human Rights violations in our government policies and actions. The tough on crime agenda without dealing with the root causes of increased crime again continues to punish those people already marginalized. Tough on crime in combination of supporting the root causes is the solution required. Unless we seriously tackle the issue of poverty the tough on crime agenda will not only be ineffective but in the long-run cost more than the social supports required to enhance every Canadians outcomes.

Much policy discussion has centred on what to do about persistently high rates of youth unemployment. Two approaches have been adopted, in varying degrees, in OECD countries over the years; one focuses on increasing participation in schooling, and the other on active labour market programs to help youth find jobs. In addition, programs in some countries target youth experiencing homelessness, drug abuse, or crime.

Conference Board of Canada

Youth unemployment (Age 20-24) is twice a high as other age groups. The negative effect this has on emotional well-being as well as on pressures on families as they work towards helping their young adults become self-sufficient is not easy to measure. However social and economic indicators are describing devastating long-term  consequences unless policies are created to provide a more inclusive community.

Society often overlooks how government policies and actions may be in direct violation of Canadians expectations of treatment of people and specifically children. Although it may not have been the intention of government, the results of the Canadian government’s policies have resulted in a neglect of Canadian children as defined by the RCMP and supported by the findings of the Conference Board of Canada, OECD and the United Nations.

What is Child Abuse: RCMP Definition

The RCMP define neglect as “The failure to give due attention or care to a child resulting in serious emotional or physical harm.” With government policies resulting in increased child poverty, increased youth unemployment, working-age poverty and a failure to support Canadian families find work and provide for their children with an opportunity to be successful, one could make a case that our government is guilty of neglect of Canadian Children and the resulting social consequences and costs associated with policies that widen the gap between those that have and those that do not. This policies are not only hurting Canadian children but in violation of their human rights.

The Canadian Human Rights Museum’s galleries will be evolving and changing. The legacy of previous government policies have resulted in numerous human rights violations. Residential Schools, the Internment of Japanese Canadians, women’s rights and now the apparent disregard of our children, for our future are just a few examples.

The untruthfulness about the politics is that cutting supports to children and families will balance our budget. There is absolutely no supporting evidence of this even in the short-term. The evidence is even in the short-term there are increased health, crime and societal costs that more than off-set the apparent savings. The long-term cost to our society as indicated by the Untied Nations, OECD and economists generally is the financial burden now and in the future will negatively affect the well-being of Canadian society.

We can no longer neglect the needs of Canadian families, youth and children. Without immediate action our generation, this government, will find their place in a future gallery at the Canadian Human Rights Museum.

The Cost of Poverty

My novel 'When Eagles Dare to Fly' represents my belief that good will always triumph over evil and by developing who we are on the inside we will find our way. My newest novel 'The Fates' was released earlier this year that examines a society that discovers immortality. I have a blog called an 'Author, blogger and his musings' which talks about my writing, political issues as well as other areas of interest like education, art and photography,
View all posts by jameswhoddinott →
This entry was posted in My Writings. Bookmark the permalink.